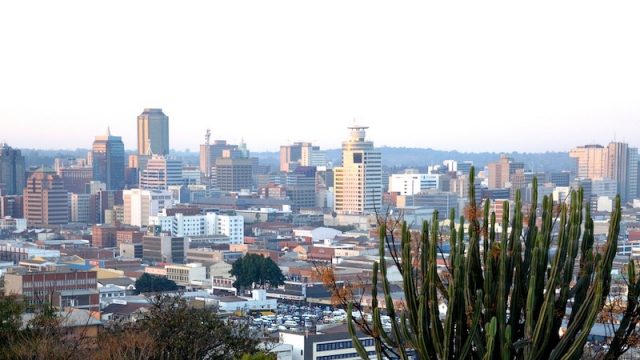 From an Afrocentric point of view, it was with shock that I watched the unfolding Covid-19 situation in America.
The world’s undisputed superpower, with a total population of 330 million, is totally unprepared and failing to cope with the scale and scope of the pandemic and is now the worst hit country globally with deaths surpassing China, the initial epicentre of coronavirus and India, both with a billion plus in population.

Much more worrisome however, is the growing undercurrent of the sacrifice of human lives at the expense of a return to full business operations to save America from economic ruin and safeguard its status as a global superpower.

This discourse has found currency in demonstrations across predominantly republican states by some citizens couched in the mantra of protecting basic rights and freedoms guaranteed by the American constitution which are under assault by the lockdown.

In political circles the discourse has found currency in the voicing of figures such as Georgia’s Republican Governor BrianKemp who is advocating for a lifting of the lockdown in his state even though coronavirus deaths are rising.

We need to locate Kemp’s decision in the context of the impact Covid-19 has had so far on the American economy.

The US is experiencing massive job losses due to coronavirus. In five weeks, the US has lost over 26 million jobs and 6.6 million of these were lost last week and over 4.4 million have been lost this week.

The scale of the losses, which at the initial stages were mainly in the travel, tourism and energy sectors but are now affecting other sectors, is unprecedented and has seen Congress creating a $US 349 million fund which gives companies money if they retain or rehire workers.

The fund ran out of money in just two weeks and the Senate approved a bill this week to replenish it.
This, coupled with the knock on businesses and stocks has understandably created panic among employers and employees, with politics also at play as President Donald Trump, a republican, faces an election this November.

Faced with a difficult political and economic situation Republican Governor Brian Kemp has announced plans to open nail salons, massage therapists, bowling allies and gyms from this Friday, while restaurants and movie theatres will be opened next week on Monday.

The move comes as fellow southern states South Carolina and Tennessee also announced plans to relax some of the social distancing measures in place.

The decision to reopen, which seeks to balance job losses against the lockdown to contain the coronavirus has been described as a huge risk and has been met with condemnation mostly from Democrats.

What begs the question is Governor Kemp’s admission that cases will continue to rise in Georgia.

He is quoted as saying, “We’re probably going to have to see our cases continue to go up, but we’re a lot better prepared for that now than we were over a month ago.”

Governor Kemp’s remarks resonate with a sentiment expressed by a resident of Phoenix during a Pro Trump demonstration in favour of lifting the lockdown. The man says, “It is unfortunate that people die. It’s part of living. We are not going to make it alive.”

President Trump is supporting conservative activists who are demonstrating across the country against the lockdown regulations which they call an assault on American freedoms.

Concern is however growing within the US that the demonstrations could damage efforts to contain the virus.

At the expiry of the extended lockdown on the 3rd of May,Zimbabwe may find itself in a similar scenario.
Business representative bodies have indicated that companies are not in a position to pay more than one-month salaries when workers are staying at home.

This may lead to massive job losses as companies shed labour if the lockdown is extended further.

Results from a survey conducted by the Zimbabwe National Chamber of Commerce, ZNCC indicate that there will be massive job losses and 38 percent of companies will lose revenue above $ ZWL 5 million due to the extension of the lockdown period.
The survey also projected a negative growth of minus 9 percent in 2020, 12 percentage points down from thenational budget projection of 3 percent growth.

The survey further projects a budget deficit of more than 5% of GDP as government expenditure is expected to increase due to the effects of Covid-19.

“The tourism sector will be the most hard hit as it is expected to shed almost 25% of the total formal sector employment followed by the manufacturing sector. If the total lockdown is extended without resorting to partial lockdown some of the leisure and tourism operators might completely collapse,” sayspart of the report.

Urban areas which largely depend on informalised trade have been hit hard by the lockdown while a report by the Zimbabwe Environmental Law Association has documented the adverse impact of Covid-19 in rural livelihoods which are being stalked by hunger.

Zimbabwe is thus in an unenviable situation. Our coronavirus statistics are still rising and it would be suicide to lift the lockdown before the curve flattens or begins to fall.

To compound the situation, there are also returning citizens who bring a risk factor and media reports indicate the majority, who are coming from South Africa which has a much heavier case load than Zimbabwe are finding their way back home through illegal crossing points which are not manned by health authorities.

It has also been reported that three among sixty-five returnees quarantined at Belvedere Technical Teachers College have the disease. In all probability our case load will continue to rise in the short term.

Yet on the other hand the economy is screaming, and vulnerable as it is, there is very limited capacity to absorb shocks like Covid-19.

What this means is that the economy is an important matrix in the decision to further extend the lockdown.

What ever decision made will be a balance in a continuum between saving lives and protecting the economy.

Zimbabwe, like the state of Georgia will be faced with a hard choice.

It is however important in the debate of what we should do to be informed by evidence from other countries and territories such as Singapore and Hong Kong, and the city of Harbin in China, which saw coronavirus infections quickly erupt after social distancing restrictions were lifted.

A gradual and measured lifting with risk profiling of areas, industries and companies may appear to be the best option.
Let me hasten to say this will work with stringent screenings and hygienic measures as well as scaling up of testing to ensure coronavirus cases decrease over time.

What should Zimbabwe do when the lockdown extension ends on 3 May?

Send your views and comments below.