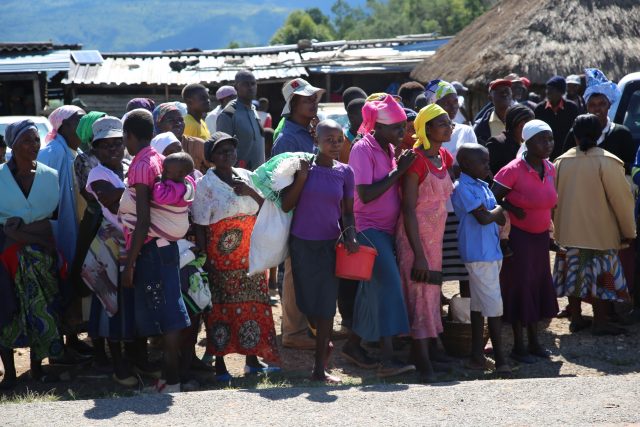 Speaking to Great Dyke News 24, a number of victims described the company as a life saver during time of struggle.

“Firstly l would like to thank the almighty for giving me this opportunity to testify how l survived from the Cyclone. Also to thank the ZCDC team and the government for assisting us with blankets, food staffs among others, without them we could have died.

“Also l would like to thank every Zimbabwean for assisting us, we are suffering here we don’t have anywhere to stay, we lost a number of friends and relatives may their souls rest in peace,” said Sekai Manzou.

“l lost my mother and brother, now l don’t have anywhere to go but l would like to thank the diamond company for assisting  us during the time of struggle, our roads were destroyed as you can see, we lost a number of cattle and property but we thank God that we are alive today,” said Whatmore Tsamba.

In an interview with Great Dyke News 24 in Mutare, ZCDC Chief Executive Officer Dr. Moris Bekezela Mpofu said they are working in collaboration with Greenfuel and Bitumen under the Ministry of Transport, Communication and Infrastructural Development.

“First and for most, ZCDC got worried when it heard Chimanimani community was affected by Cyclone Idai.

“We then started to mobilise MARS helicopters so that we could try and rescue the victims after consultations with authorities.

“We have provided earth moving vehicles to the affected places under the Ministry of Transport.

“We are working in collaboration with Green Fueland Bitumen, we have provided escavators, tippers, front end loaders, dozers and a low bed that is moving the equipment,” he said.

He added that the collaboration is meant for reconstruction of roads so that people will be able to move and deliver supplies to the affected areas.

“We have managed to open a long stretch of road where it was blocked, as we are speaking they are now stationed between Tanganda and Skyline where they are now trying to reconstruct the roads so that people will be able to move and deliver supplies.

“The operation is going to continue until it is completed as we work together with other companies.

“Apart from the equipment, ZCDC has also contributed immensely in the supply of food, blankets and many other provisions that are critical at this moment to cater for one thousand families,” added Dr.Mpofu.